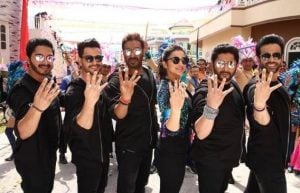 Mumbai: Golmaal Again, the fourth installment in Rohit Shetty-Ajay Devgn’s Golmaal series, starts with Tabu narrating the childhood stories of Madhav -Gopal and gang – they were orphans and found home with Jamunadas who started an orphanage.

The story, which revolves around five orphans — Gopal (Ajay Devgn), Madhav (Arshad Warsi), Lucky (Tusshar Kapoor), Laxman Prasad (Shreyas Talpade) and Laxman (Kunal Khemu), tells us what made the gang of five take different paths and what brought them back together. They are split between two teams who cannot stand each other.

However the story evolves they come together and move back to their old neighbourhood in a new, palatial house; whose owner is Tabu (Ana) and Parineeti Chopra (Khushi). What they don’t know is that the house is haunted, and later when they come to know about it, they are terrified. Who is the ghost? Will they be able to save themselves from this big problem?

There will also be, naturally, a whole lot of slapping, and a few jokes about a blind man. This is what the franchise is built on, except this time Shetty has constructed the tomfoolery around an actual and reasonably elaborate plot, one involving ghosts and haunted houses and murder most foul.