By KalingaTV Bureau Last updated May 9, 2017 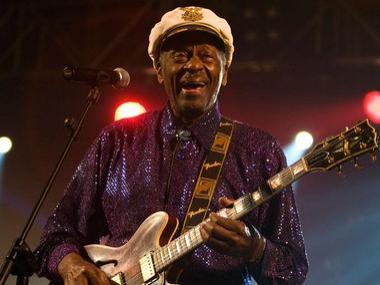 For a man credited with being the Founding Father of rock ‘n’ roll, Chuck Berry’s career trajectory was rather tangential from the archetype. Here was a 30-year-old married man making his debut in a genre that epitomised the youth, postured individuality and immense disdain for those older.

It’s not like he created rock ‘n’ roll; the genre was a few years in the making by the time Berry came in. But he duck-walked his way to give it sonic structure and a distinctive attitude, and in the process, nonchalantly defined its personality as a way of life with songs such as Johnny B. Goode, Roll Over Beethoven, Around and Around, Brown-Eyed Handsome Man, School Days, Memphis, Nadine, No Particular Place to Go and Rock and Roll Music among others.

Born Charles Edward Anderson Berry in 1926 and heavily influenced by swing artist Louis Jordan, he made his debut in 1955 with Maybellene, a cover of the country song Ida Red, making it one of the first songs to be the perfect rock package: guitar-driven, short and easy to follow lyrics about youth, and definitively exciting.

While Elvis Presley and Bo Diddley were already becoming forces to reckon with, Berry came in with a template for rock that remains its indelible identity. All thanks to Muddy Waters introducing Berry to the Chess brothers who were looking for a talent that could go beyond the rhythm and blues space. Berry set rock apart from pop and R&B by honing its character. Rich song-writing substantiated by memorable guitar solos, and showcased on stage with elaborate showmanship, Berry’s understanding of rock with its decidedly young soul is how we perceive the genre even today.

Unlike The King Elvis Presley, Berry wrote his own songs, setting seemingly simple lyrics to memorable riffs. He rewrote the process of musical storytelling, taking it from poetic verbosity to a guitar-slinging ballad of brevity that infused humour, retrospection and oodles of gall.

In the early years, rock stood out against pop for its song-writing, where the format of an intro-verse-chorus-guitar solo-verse-chorus was a marked change from the upbeat repetitive structure of pop. Where the irresistible wordplay told a tale of matters universal in a manner that seemed so accessible, giving him the aura of being an “eternal teenager”.

No wonder then that Bob Dylan once called him the “Shakespeare of rock ‘n’ roll”, a man who was among the first popular acts to write as well as perform his own music, blending influences of jazz, blues, and rockabilly into his unique style of song-writing.

If Berry gave rock its lyrical style, he showed legions of musicians after him what it took to be a frontman. Before Michael Jackson, Freddie Mercury and a host of other iconic artistes, there was Berry and his trademark strut. He’d swagger his way on stage, each step reiterating an indomitable attitude that had hitherto been missing.

Until Berry took to the stage, rock ‘n’ roll musicians were—for want of a better word— stately, singing elegantly to tunes played on pianos and the occasional acoustic guitar. Berry shook a leg, and the foundations of the genre with it. He duck-walked, he slid, and he pranced with unseen authority, with a defiance and with lyrical content that resonated with the youth, thus inspiring generations of musicians including AC/DC’s Angus Young.

His greatest contribution to the genre and the world of music was to keep the guitar riff at the very core of the song. What seemed like humble chord progressions went on to become the epicentre of the song, giving birth to generations of rock musicians in the process.

While the rock ‘n’ roll groove in the music of Elvis or even Little Richard was infectious, it was their vocals that the songs rode on. Berry elevated the guitar to be the genre defining element with an unmistakable ability to remain in your head much after the song ended. The riff became the hook. From there on, everyone from Jimi Hendrix to Led Zeppelin, the Rolling Stones and Bruce Springsteen to AC/DC, took the riff to be a defining feature.