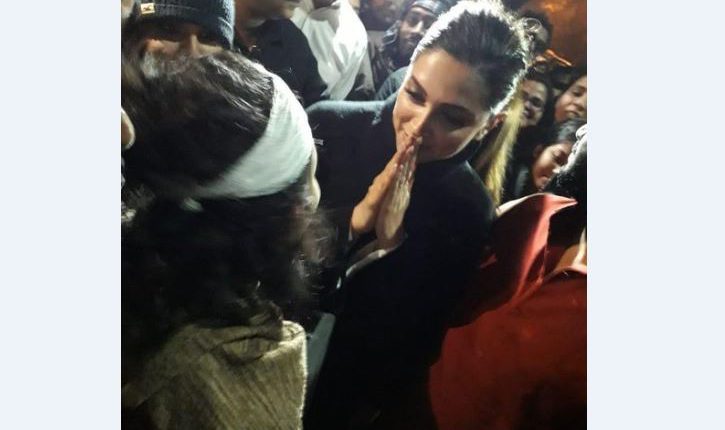 New Delhi: Deepika Padukone’s decision to attend a protest meeting on Jawaharlal Nehru University (JNU) campus on Tuesday has riled up some people, who have called for a boycott of her movie ‘Chhapaak’, while another section has supported Deepika’s presence in JNU and has extended their support by tweeting #IsupportDeepika.

#BoycottChapak was one of the top trends on Twitter used by those who are against Padukone’s decision to visit JNU, while #HumDekhengeChhapaak, #IStandWithDeepika and #IsupportDeepika trended among people praising the actress for her stand on the JNU campus violence on January 5.

A section of Tweeple showed their solidarity with her by tweeting, “This is the time to understand that @deepikapadukone is a brave woman who took stand and this is what celebrities must do.I appreciate this courageous woman. #supportchaapak.”

Another user wrote, “While Booked Chhapaak ticket. Never planned to watch Chhapaak. But since Deepika was trolled, watching this movie became my top-most priority…#Boycott_Chhapaak #ChhapaakReview.”

“Now that bhakts are trending boycott Chhapaak, I will definitely watch it. Hats off @deepikapadukone for showing solidarity with #JNU. #JNUTerrorAttack #ISupportDeepika #HumDekhengeChhapaak,” read one post.

However, many have dubbed Deepika’s action as a “publicity stunt” in order to promote her upcoming movie ‘Chhapaak’.

One user wrote, “Whatever has happened, has happened for good so yes, it’s good that @deepikapadukone has taken a stand on #JNUProtests and has decided to show her real colour by announcing her open support to #UrbanNaxal. It has really helped us to make our mind as well #Boycott_Chhapaak.”

Another user wrote, “Now I will not be watching Chhapaak! Because Deepika Padukone has thrown Acid on the face of Nationalism.”

One post read, “It’s not necessary that a good actor has to be a good person also.”

‘Chhapaak’ is based on the life of Laxmi Agarwal, an acid attack survivor. The film, helmed by Meghna Gulzar, is set to hit the screens on Friday.