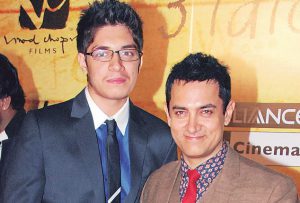 Mumbai: Bollywood superstar Aamir Khan’s son Junaid Khan is all set to walk on his father’s footsteps. But he has preferred theatre to the silver screen to showcase his acting skills.

Junaid will be seen in director Quasar Thakore Padamsee’s “Mother Courage and Her Children”, an adaptation of Bertolt Brecht’s play. The play will be showcased at the suburban educational institute St. Andrews in Mumbai on August 19 and 20 and also on September 9 and 10.

Play director Padamsee revealed how Junaid had not used any clout when he approached him for the play and said, “It was an open casting call and someone had given him my number. When he came, I thought he was just another kid from HR College. He said he had been to drama school and seemed to understand the play and had lovely ideas.”

Padamsee also maintained that Junaid is just like his father adding that he used to come early and stayed late. She was all praise for the newcomer saying that he is working on all aspects of acting.

Juniad had assisted filmmaker Rajkumar Hirani in PK, which starred his father Aamir Khan in the iconic role.