Amazon’s Bezos arrives in India, pays homage to the Mahatma 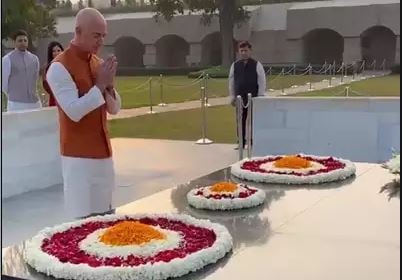 Bezos, who is ranked amongst top most global billionaires, shared a video of his visit to Raj Ghat on Twitter.

In the video, Bezos, wearing a traditional Indian attire of white kurta-pajama and orange Indian high-necked waistcoat, is seen laying a wreath on the memorial site.

“Just landed in India and spent a beautiful afternoon paying my respects to someone who truly changed the world. “Live as if you were to die tomorrow. Learn as if you were to live forever.” – Mahatma Gandhi,” his tweet said.

Bezos is on a three-day India visit starting from Tuesday. He is likely to attend an event here organsied by Amazon for MSMEs. He is also likely to meet Prime Minister Narendra Modi.

In addition, he is also likely to meet top Indian businessmen and Bollywood celebrities in Mumbai.

Bezos’ India visit comes at a time when the e-commerce player is facing an anti-trust investigation on multiple counts, including deep discounts and exclusive tie-up with preferred sellers, in India.

It had faced similar investigations in the EU and the US.

On Monday, in a major setback ahead of Bezos’ visit, fair market watchdog, the Competition Commission of India (CCI) ordered an enquiry into the operations of both Amazon and Flipkart on multiple counts, including deep discounts and exclusive tie-up with preferred sellers.

Finding merit in the allegations leveled by traders’ body Delhi Vyapar Mahasangh, the Commission on Monday asked its Director General (DG) to complete the investigation in 60 days from the receipt of the order.

Meanwhile, traders across 300 cities of the country have planned to hold protests under the aegis of the Confederation of All India Traders (CAIT) during Bezos’ visit.

Historic impeachment trial of Trump to start next Tuesday