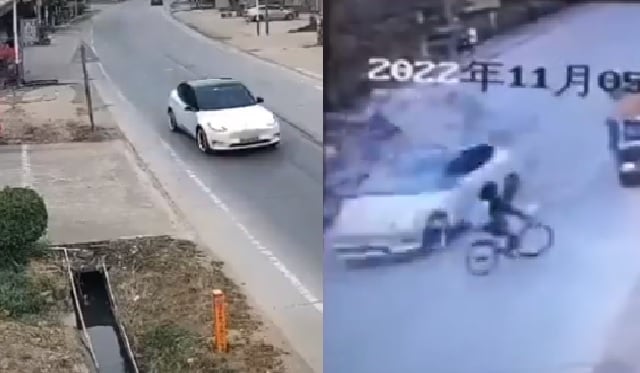 How terrifying can an out-of-control electric car be has been shown in this trending video on social media. A video of a Tesla Model Y electric car, which seems to have lost control, speeding through the streets of China has gone viral on social media. The speeding Tesla has reportedly killed two people and injured three others.

According to reports, the incident occured in southern province of China’s Guangdong on November 5. The Tesla Model Y reportedly malfunctioned after the driver tried to park. The driver said that the EV’s parking button did not work when he wanted to park the car instead, it started accelerating. When the drive applied brakes, then allegedly did not work.

The viral video shows the CCTV footage of various areas of the malfunctioned Model Y speeding down the road at alarmingly high speed. The video begins with a Model Y car can be seen slowing down for a parking maneuver at the side of a street when suddenly it starts accelerating and moving through the streets at a high speed. At first, the car can be seen nearly missing several pedestrians then it goes completely out of control and hits many cyclists and drivers along the way. At last, it stops after crashing into a three-wheeler and building. As per reports, a motorcyclist and a high school girl were killed in the accident.

The driver alleged that he could not control the vehicle as the brakes of the Model Y were not working at the time. The incident is being investigated by the police in China.

Meanwhile, Tesla has claimed that its data shows that no brake input was recorded during the accident, a Reuters report said. Police are currently seeking a third-party appraisal agency to identify the truth behind this accident and the matter is currently under investigation.

Crazy @Tesla video from a week ago. Just saw it on Reddit.

Driver was trying to park the car and then things went awry.

It just kept on accelerating.