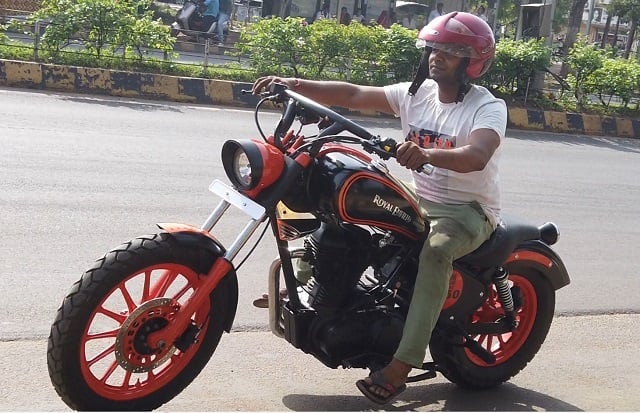 This modified Royal Enfield Thunderbird 350 looks more like a Harley Davidson than a Royal Enfield bike. The surprising thing about the bike is that it is not manufactured outside Odisha and is rather built in Bhubaneswar itself. Even though the modified Thunderbird 350 motorcycle appears to be very expensive it isn’t. The total amount of money spent on the bike for modification is Rs 1, 20, 000 and took 2.5 months to be fully prepared.

The modified Royal Enfield Thunderbird 350 which resembles a Harley Davidson is built by Ganga Patnaik. Ganga is a bike designer and modifier who has the experience of modifying more than 1000 bikes. In order to modify this special Thunderbird bike, Ganga spent 2.5 months of time which include many sleepless nights. He claims that the design of the motorcycle is self-styled. He also claims to design and built the chassis, lights, tank, and retro-designed handlebar. The only thing that has been carried from the original Thunderbird bike is the engine. The Royal Enfield Thunderbird 350 was purchased way back in 2012. Ganga owns a bike modification shop named ‘Next Level Modification’ which is located at the Chandrashekharpur area of Bhubaneswar. Ganga feels that he is blessed very much by Lord Jagannath and thanks to the almighty for his achievements. He considers himself more of an artist rather than a bike designer. He proudly says that his bikes can be found not only in Odisha but also outstate. Ganga is hopeful of manufacturing more popular modified bikes in the future. He also feels that the demand for modified bikes in set to increase in the future. Even though there are a lot of modified models that are preferred by bike enthusiasts, the KGF model is most popular one. Around Rs 45,000 is required to for a KGF modification, says Ganga. On the other hand, modifications on the Bullet start from Rs 60,000.

Also read: 2022 Hyundai Tucson teased ahead of its launch in India,…