A lady Ola S1 Pro rider is reportedly admitted in ICU after she was thrown away from the scooter when the front suspension gave away. 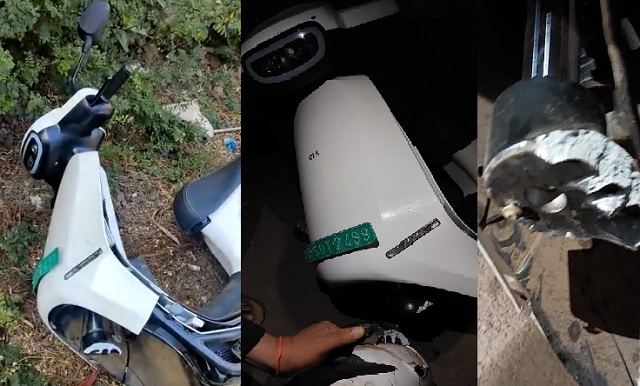 Ola Electric seems to be in hot waters quite often. As the incidents regarding its EV’s catching fire died down, it once again came to the limelight following an accident involving Ola S1 Pro, which allegedly landed a lady rider in the ICU.

The incident was reported on Twitter by a user named Samkit Parmar, who claimed that his wife is currently admitted to the hospital after she was thrown away from the Ola S1 Pro electric scooter when the front suspension of the scooter gave away.

Samkit Parmar shared that his wife was riding at a speed of 35 km/h at around 9:15 PM , when the suspension suddenly gave up and the front wheel detached from the two-wheeler. This caused the scooter to throw the lady causing major injuries to the face and head. However, he did not mention whether she was wearing a helmet or not.

He posted some pictures of the vehicle and the injured lady in this Twitter post. The pictures shows the woman with injuries on her face. Samkit Parmar has also tagged Ola Electric and Bhavish Aggarwal, Founder and CEO, of Ola Electric in the post. However, he has not received any official response on the same yet.

The incident caused serious injuries to her head and face. The lady is currently in the ICU.

Ola usually updates in such accidents with the speed of the vehicle and other relevant data that gets stored in the cloud in real time. However, the brand is yet to make an official statement at the moment.

Prior to this, there were several incidents where the front suspension of the Ola S1 Pro has given up. There have been several instances of the suspension giving away causing serious injuries to the rider.

Many Ola electric scooter users have complained about the suspension breaking while riding the scooter at a very slow speed on Twitter. One user even complained that he faced the same issue only after six days of getting the Ola S1 Pro delivery.

Meanwhile, Ola is reportedly working on a new affordable version of the S1 Pro for the Indian market. It may get launched soon. While there are not many details available on the upcoming scooter, the price details are likely to be out by the end of this month.

Ola Electric CEO Bhavish Aggarwal revealed that the company is also working on a Li-ion battery cell and shared a image of the same. Bhavish says that it is the brand’s first indigenously developed Li-ion battery cell.
Here is the tweet:

Yestrday a horrific incident took place with my wife. She was riding her @OlaElectric at 9.15pm at a speed of about 35kmph when her front wheel just broke out of the suspension.She was thrown away in front and is in the ICU facing severe injuries. Who is responsible?@bhash pic.twitter.com/Ko8fmkiNGL