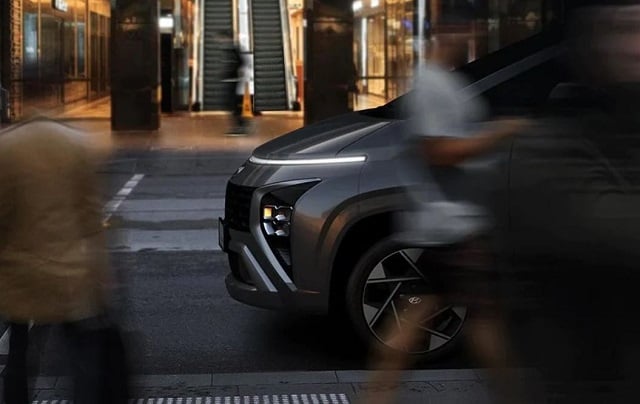 South Korean carmaker Hyundai offers a wide range of models including hatchbacks, SUVs and sedans in the market. A few days earlier, the carmaker is going to bring a new MPV for its prominent markets. The upcoming MPV called Hyundai Stargazer was teased earlier by the company ahead of its global debut later this year. The Hyundai Stargazer will make its debut at the upcoming edition of GIIAS (Gaikindo Indonesia International Auto Show) scheduled to begin on 11st August 2022 in Jakarta.

A teaser video of the upcoming MPV from Hyundai has been leaked on social media Ahead of its debut. As per the latest spy video, the Stargazer will flaunt a tear-drop profile with a rising window line and a curved roof and is likely to measure around 4.5 meters in length. The Stargazer is tipped to feature the signature parametric jewel theme on its grille which is in sync with Hyundai’s latest design. The grille has a thin LED strip running above it while it is flanked by split headlamp clusters on either side. The Stargazer is spied with a bold looking front bumper that has vertically stacked LED headlamp clusters along with a wide air dam.

The MPV is spied with a large, curvy windshield and compact yet pronounced bonnet. It is clad in a massive squared wheel arches that are filled up with machine-cut dual-tone alloy wheels. Another prominent highlight is a distinct character line running across its shoulder. The MPV gets H-styled connected LED taillights and a large hexagonal windshield at the tailgate.  It also sports a ‘STARGAZER’ lettering in bold while the boot lid is adorned with T-shaped LED elements. Other visual highlights include a shark fin antenna and a large side step.

Inside the cabin, the MPV has been spied with two captain seats in the middle row. It has a a large free-floating touchscreen infotainment system and the air-con vents are fitted below it. The infotainment unit will support both Android Auto and Apple Carplay.

The top-end variants of the Hyundai Stargazer is expected to come with leather seats as well as ADAS (advanced driver assistance system).

Though there is no information on possible engine options but Stargazer is speculated to be powered by the same 1.5-litre naturally aspirated petrol motor that is also used in Creta. This unit can produce 114 bhp and 144 Nm of peak torque. The company has not confirmed whether the Hyundai Stargazer will arrive in India or not. If it gets launched in the Indian market then it will compete against other MPVs like Kia Carens, Maruti XL6 and Mahindra Marazzo.