Did you know? Android users are better car drivers than iPhone users

The rivalry between Android phones and iPhones is not new to the users. Be it the user experience, the value for money, or the specs, users of both the platforms have something to boast of.  However, the latest comparison between Android and iPhone is not on any of the above factors and is rather on driving. According to a study by Jerry, Android users are safer drivers in comparison to iPhone users.

Jerry, an insurance company has recently conducted a survey and analyzed the behaviour of drivers while they were behind the wheel.  20,000 drivers were included in the survey and the travel of 13 million kilometers were analyzed. The time period that was taken into consideration was 2 weeks or 14 days. The data generated included factors like acceleration, speed, braking, turning and distraction. After generating the overall driving scores, they were grouped into smartphone operating systems as well as demographic features. 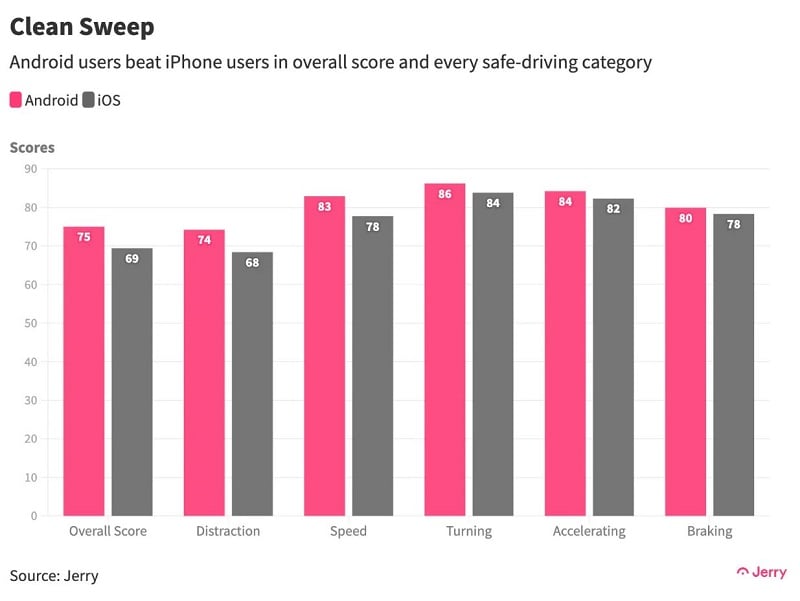 It was surprising to find out that the Android users have beaten the Apple users in every segment.  Regardless the categories of age, gender, marital status, education and credit rating, the Android users were ahead of Apple users. The widest margin that came out in the survey was in the distraction category. Android users kept their hands off their smartphones while driving. The iPhone users were more likely to be busy with their smartphones as compared to Android.

The insurance company included car riders of different age groups. The age groups included people ranging from ages between 18-65. Jerry also took the liberty to ask some personal questions about the riders. The car riders were asked about their educational qualifications as well as their credit scores.

Jerry, had clarified that there were twice as many iPhone users as compared to Android users in their survey. Well, if the survey is conducted in India, we are not quite sure about the same results.